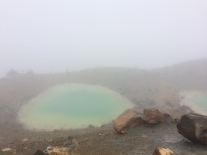 A couple of months before leaving for New Zealand, my good friend Fran and her fab partner in crime announced that they’d also be holidaying on the other side of the world in January. We set about planning the Tongariro crossing for mid January and made a pact that we’d do it together. Once I arrived in NZ and heard about the storm setting in, it meant that I’d be on a tight schedule of cycling to make it to Rotorua in time to meet them and drive down past Taupo to the national park. Typically I was ready to face the challenge of 800km in 10 days with a fully laden bike, in fact I did in 8 and allowed myself 2 rest days. One in Paihia and one in Cambridge.

On 15th we drove down the centre of the North Island with an essential Burger King pit stop. We Stayed in the national park and met their pal Dunc, the infamous Kiwi who swore he’d do the hike in his jandals just because he’s had as nails like a true Kiwi. We were assured clear weather between the hours of 10am-2pm on our crossing day, so we’re in good spirits and feeling pretty excited at the sights we were about to experience. 3 active volcanos with vast craters and emerald lakes!

We opted for the early bus to avoid the “tourists” and set off at 7am. Now, in the morning things were looking pretty dreary. Grey and drizzle, reminiscent of good old London, and yet here we were in NZ summer. We packed wet weather gear and warm layers as the weather up at altitude could commonly change in minutes.

The first 5km slowly took us up through the valley and past the Soda Springs waterfall. Then came Devil’s staircase ascending into a cloud. Dunc kept promising the weather would clear as forecasted. Intermittently his work phone would go off to the tune of “This girl is on fire” apparently no annual leave day is truly a holiday in the tractor selling business. We asked him to change it to “Eye of the Tiger” as we hiked up and up.

By the first crater, the warm winter gear went on. Our view of this incredible landscape was cloud and the 10 metres in front. Eventually we had traversed up to the Red crater summit at 1,886m where on clear days there is a view of mount Tongariro just another 100m up. Then came the ski Sunday descent to the lakes on sandy scree. This section was on a ridge between 2 pretty epic drops. The sideways rain and strong wind (still in the cloud) lead to us all having bright red faces for the rest of the day…it certainly wasn’t sun burn. Secretly, with my fear of heights, I was relatively thankful that the drop was hidden from view!

Lunch was by the Emerald lakes, we went slightly off piste to sit next to them quite simply just to try and see them. Fuelled by muffins we finally reached 3km to go, only to realise we only had 30mins before out bus left and we certainly weren’t prepared to wait 90 mins for the next. So we whipped off our water-proofs, Dunc set up our playlist (the mission impossible theme on repeat) and with Fran leading our dash walking pole held high like a spear, we RAN slipping and sliding our way descending past the gushing river through tropical jungle. We made the bus with 5 mins to spare and sweating like beasts. It was a hilarious end to what was becoming a complete washout of a day….and right there is the reason you do these things with friends.